If you’ve not heard of Thug Kitchen before, then we’re about to clear it up. Imagine a clean, basic, somewhat boring cookbook… and completely shake it up. Because Thug Kitchen doesn’t do things by halves, and it doesn’t create boring basic recipes – instead, it breaks the mold and fills it with recipes that are packed to the absolute brim with flavor. 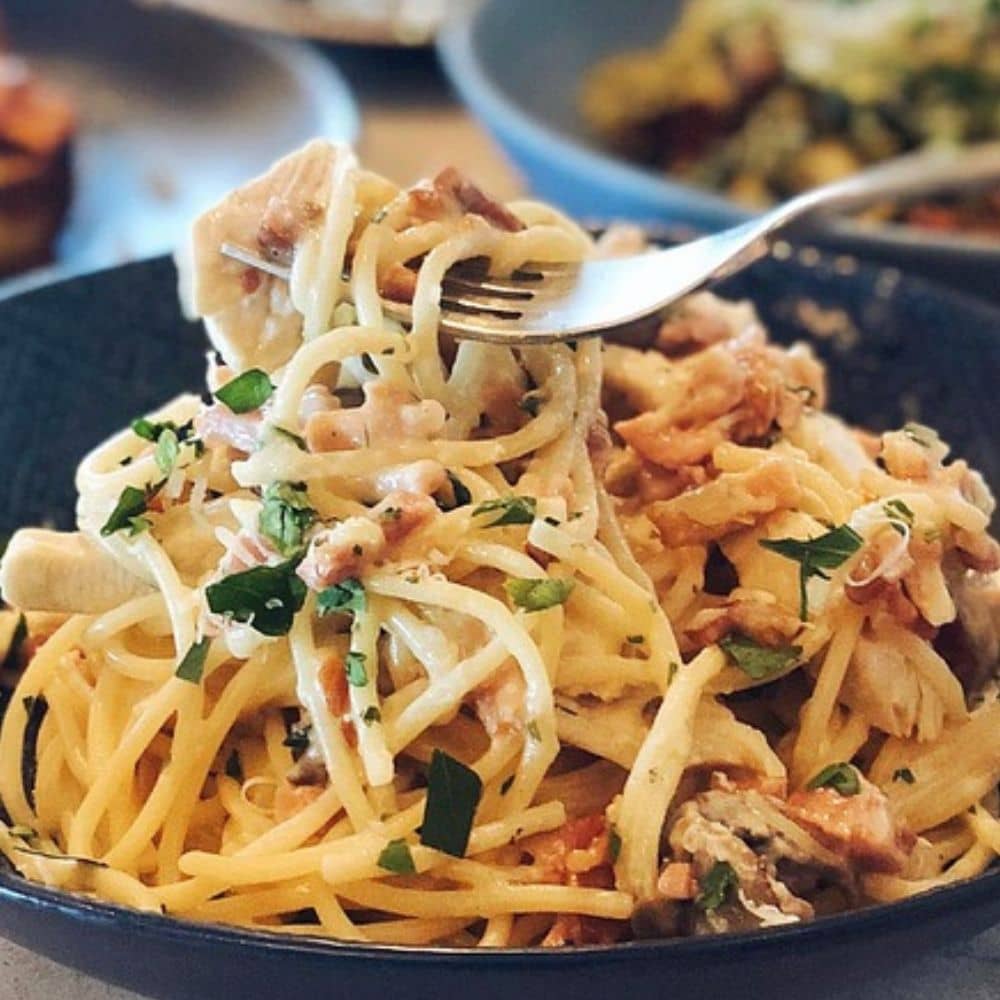 Their most popular cookbook is Thug Kitchen: The Official Cookbook: Eat Like You Give a F*ck and as you can imagine, it truly isn’t like any other cookbook around.

It is filled with the world’s best recipes, all mouth- and eye-watering good.

A MASSIVE plus is that every single recipe is vegetarian, and most of them are vegan.

Honestly, once you’ve tried these Thug Kitchen recipes, you’re never going to want to go back to normal gray-scale ones.

Within this article, we will introduce the following recipes:

Get your flavor hats on!

The first killer recipe in this article is the Thug Kitchen cauliflower cream pasta.

This is a great all-rounder dish, full of flavor and completely transformed by fresh herbs.

Not only is it a great “healthy” meal, but by adding some cheese and baking it, it can become a super fancy macaroni.

Great for a girls’ nights in, family movie nights, or even just for scoffing when you’re by yourself… don’t feel guilty, we all do it!

My oh my, is there anything better than a thick, creamy risotto to kick off the spring?!

This bad boy includes all of the world’s best ingredients: garlic, shallots, and a healthy helping of white wine.

This has to be one of the best Thug Kitchen recipes out there, and is sure to immediately become one of your favorites.

To make it extra flavorsome, add in a cup more broth and let it cook down until the wonderfully thick rice has sucked in even more of that flavor.

Have you ever tried coconut curry soup? Well once you’ve tried this, you’re going to wish that you’d consumed it every day of your life.

A little savory, a little spicy, this dish is already pretty perfect. However, if you fancy some protein, a handful of fried tofu would go exceptionally well.

Alternatively, you could pop in some baked eggplant and cashews and take this dish to a whole other level.

Sweet baby Jesus, my eyes are watering just from thinking about this dish. Honestly, the photo in the cookbook shows half a bowl of noodles, half a bowl of delicious veggies, and sesame seeds, sliced green onions, and some edamame.

Frankly, what combo could be better than that?

This dish is a perfect one for big dinner parties, as it’s relatively simple to make but truly packs a punch. Plus, it makes for great lunch leftovers.

I’ll be honest, I had no idea what this was before I read the recipe and tried it out. But as it happens, Hoppin John is an epic dish which is usually eaten to celebrate New Year, and a staple for the kitchen table for every week (or day!) in-between.

Basically, this bad boy is packed with protein and fiber and all that good stuff – and it tastes absolutely delicious, to boot.

To really turn it into the best dish that you have ever had in your LIFE, add in some Tabasco. I swear, it’ll skyrocket the whole thing.

To break up the delicious savory dishes, here’s a batch of sweet potato loaf.

Ever wonder how you’re ever going to find the best Thug Life cookbook recipe? Well, we often think the same… and this one is definitely up there!

Have you ever tried bara brith? No? Well, it’s pretty similar to that. It’s light, it’s sweet, and it’s incredibly moorish, so if you’re anything like me, you’re probably going to eat the whole thing in one go.

Thankfully for you, the sweet potato makes the whole thing healthy… right?

As one of the classic recipes in the Thug Kitchen cookbook, this spaghetti pie is sure to hit all the right places.

Not only is this one vegan, but it is also 100% gluten-free. Frankly, I have only had spaghetti pie once and it was kind of like a mis-match of chocolate, cake, and carbonara… it was interesting, to say the least.

This spaghetti pie is absolutely epic, though. It is pure comfort food and looks a little like the world’s weirdest birthday cake. This one is savory, but if you plan on experimenting with the ingredients, plum is a funky addition.

Do you hear that…? That’s the sound of me demolishing four portions of enchiladas in one go. If you dream big enough, you can do the same.

The beauty of these enchiladas is that if you don’t have any of these ingredients or fancy adding in a little extra, you can mix it up! Truly, freedom is bliss.

Top tip: to truly make this dish pop, double up on the chili powder and lime juice. Believe me, it’s a masterpiece.

This is easily one of the best soups in the world and can be made with simple ingredients that you probably already have in the house.

If you’re ever short on time, this is an epic recipe. It takes less than half an hour, and if you double- or triple-up on the recipe, you can refrigerate it and continue eating it throughout the week.

As a top tip, I recommend making a million more of the white beanballs, just because you’re likely to snack on them throughout the rest of the day (and night…).

If you’re after a fun cooking idea, then this is your man!

You’re probably wondering, what on earth is a flauta? Basically, they’re like a rounder, longer taquitos.

They’re filled with every little delicious ingredient that your heart could desire, and they pack a bloody good crunch.

If you’re after an easy-to-cook recipe to follow, this is a killer one. It also helps that it is simultaneously one of the best.

One of the best bits about this chickpea biryani is that you only need one pot to make it. It’s fast, easy, and cleaning up afterward is pretty damn simple.

This recipe really thrives when you pop in a fair amount of ingredients, so your creative genius can truly flourish. Don’t have garam masala or chopped cilantro? Improvise!

By the end of it, you will have a delicious biryani that will make your cheeks tingle with spice – if you do it right.